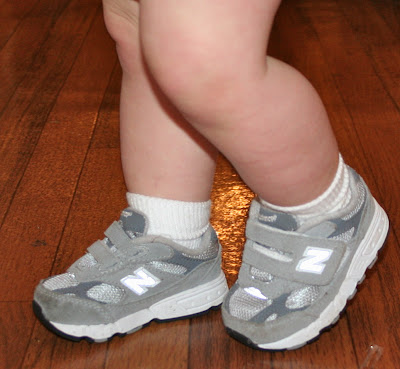 Last week we had to go buy Roman his 1st pair of tennis shoes 🙁
Yes, this made me very sad. It means he’s growing up. I tried buying him a cute pair of sandals (that looked very little boyish) but his ankles are so fat these were the only ones that came in XX wide!
Since he is growing up way too fast this post is dedicated to him in hopes I will one day remember all the little things he loves!
Roman loves to talk (not sure where he gets it from)
He talks all the time but the following are the only words we can actually make out:
Dada (1st word)
Mama (most frequent word)
Eat (probably ties for most frequent)
Ju (juice)
LaLa (Isla)
Ball
NiNi (night night and he actually goes and points to his bed some nights!)
Uh-Oh! 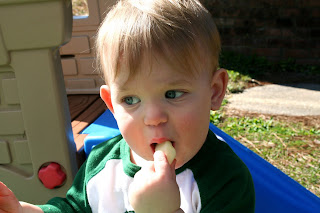 He LOVES to eat!
Above is a picture of him eating apples. Apples are his new favorite snack!
He also loves:
Hotdogs
peaches
strawberries
squash
oatmeal
LOVES corn on the cob 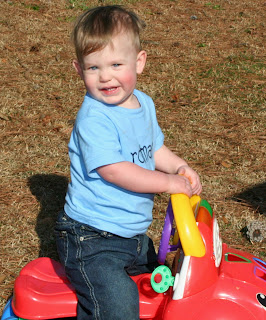 Roman’s favorite toys are anything he can ride on!
Cars, Jared’s back, or the girl’s rocking butterfly, he loves them all!

Roman has gotten the nickname “Bam Bam” around the house.
He is always carrying a bat or broom banging it on
anything he can find (including his sisters)!
And yes, he loves to be naked! 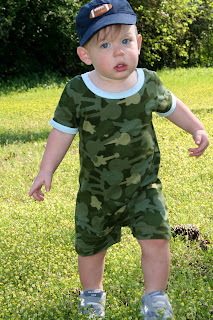 Roman LOVES to play outside!
Running around, picking up sticks (I quickly take away),
chasing his sisters, and playing on the slide!
He also loves to swing! 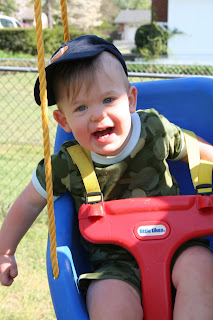 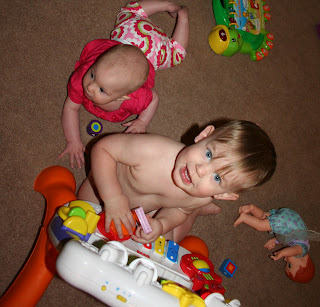 Roman LOVES to dance. He loves music.
Above is one of his favorite toys because it lights up and sings.
It also has a mirror so that he can see himself dance! 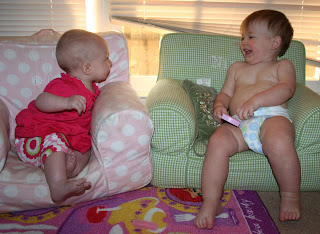 We learned this past weekend he LOVES his baby cousin Jennleigh! They sat on those chairs just laughing at each other! He also tried to ride her back like a horse.
Hopefully he did not crush any ribs!
We also learned with Jennleigh, Roman loves to give sugar! I never could catch it on camera but he loved giving her long loud kisses! 🙂
A few more things Roman loves that I have not caught on camera:
Brooms! (you have no idea)
Any toy that has a handle
Playing basketball in his room
Bath time
Bedtime
Puppy dogs
Playing peek-a-boo!
Playing on the floor with Jared
Jumping on his sister’s bed
And of course he loves his mommy! 🙂 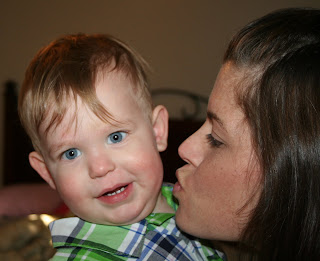